I will answer that question by describing Industrial Logic’s experience with CD, which began in 2010.

To get CD to work, we first had to make our Continuous Integration rock solid.

Doing that forced us to fix several pesky Selenium false-positives which would randomly break our build.

Timothy Fitz, an early practitioner/inventor of CD, will be teaching our Continuous Deployment Workshop in Austin, Texas, June 10-11, 2014. 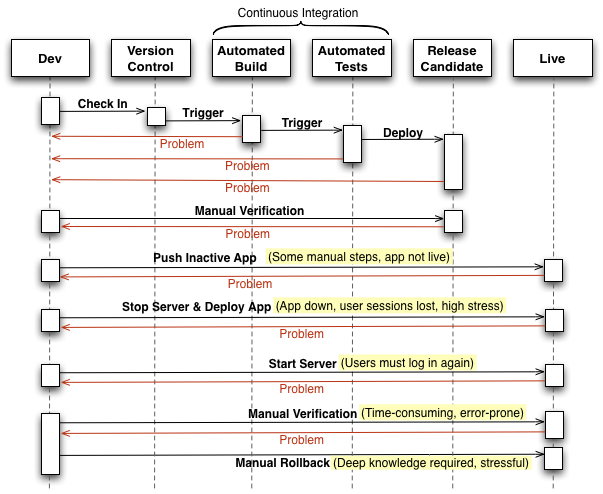 Next, we needed to make sure we had zero-downtime deploys before we could fully implement CD.

At the time, we released weekly and had very short downtimes: it took a few seconds of manual work to switch from one version of our software to the next.

Nevertheless, this switch interrupted our active users because we had to tell them that a new version of the software was being released and could they please log off and log in again in a few minutes.

Because we didn’t like to interrupt active users, especially many of them at once, we looked for low-usage windows of time to do releases.

That usually meant that we would release at odd times of day or sometimes on weekends.

Getting to zero-downtime deploys removed this interruption to users and gave us the freedom to release at any time, even during heavy usage periods.

We built a cluster of active and inactive production servers to support zero-downtime deploys: 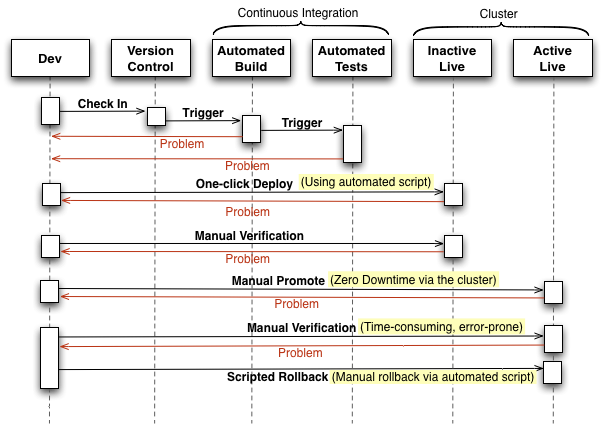 At this point, we had still not implemented CD but were already deriving value:

We were now ready to make the final push to CD.

This work only took three weeks and resulted in a completely automated release-to-production process. 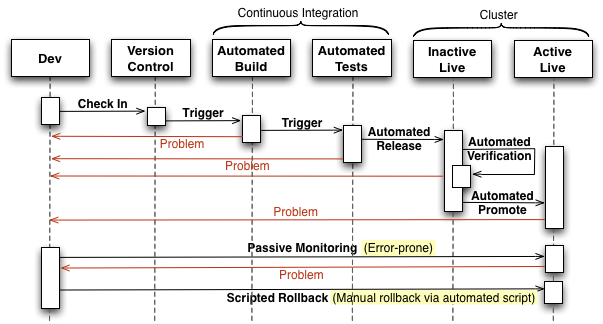 One of the most unexpected benefits from fully implementing CD was a noticeable reduction in our stress.

Releasing no longer involved coordination with other people, or searching for low-usage windows of time, or performing manual steps.

We simply checked code into version control, which kicked off a build, and if the build was successful and all automated tests passed, the release to production magically happened.

Releasing was now a boring, non-event.

We settled into the habit of continuously integrating to production and were soon releasing many times per day.

CD further refined our ability to break work down into small, valuable pieces that could be deployed.

It helped us derive these benefits:

The benefits of CD are compelling.

As a business owner and developer, I would say that we’ve had an extremely good return on investment from implementing Continuous Deployment.