Home > Blog > You Can Still Dunk In The Dark

On February 3rd, 2013, a few minutes into the 3rd quarter of the Super Bowl, the Superdome in New Orleans was suddenly plunged into almost complete darkness. It was an astonishing moment during America’s biggest sporting and advertising event of the year. With the entire stadium almost completely dark, the championship game between the Baltimore Ravens and San Francisco 49ers came to an abrupt halt.

What happened? Was it a terrorist attack? No one knew during the first few eerie minutes. Gradually it became clear that a partial power outage had occurred. It took 22 minutes to restore power and play resumed 34 minutes after it had been stopped.

During the blackout, a beautiful example of team agility occurred. Soon after the stadium went dark, a 13-person group working for Oreo, the cookie company, seized the moment to compose and publish the following tweet: 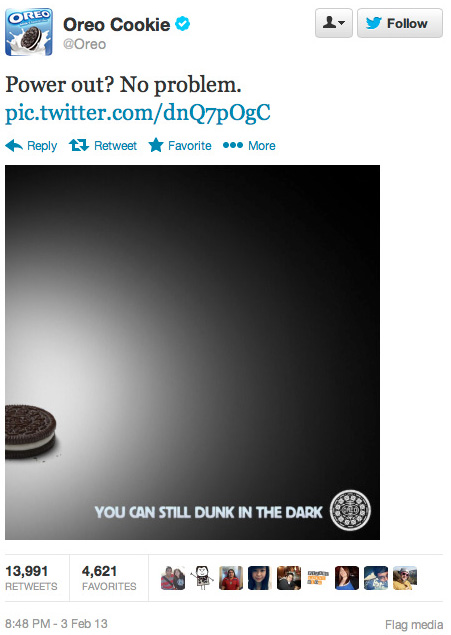 The tweet went viral. Oreo’s follower count on Twitter, Facebook and Instagram grew exponentially. Accolades poured in via social media and email. The following day, the advertising industry declared Oreo the winner of the Super Bowl. One media outlet announced that the best ad of the Super Bowl wasn’t an ad; it was a tweet. Oreo wanted to remind everyone that it was America’s favorite cookie and its agile branding and marketing team had succeeded wildly in achieving that goal.

How was this epic tweet created? You might think that a few self-organizing Oreo creatives suddenly saw an opportunity, worked fast and published the tweet, all without asking permission from any Oreo director or VP. Yet that isn’t the story of the famous blackout tweet.

Oreo turned 100 years old in 2012. To celebrate its birthday, the company decided to show how Oreo was part of America’s culture. For 100 consecutive days, Oreo would post social media content associating the cookie with anything noteworthy in the news, like the Mars Rover landing. Called the “Daily Twist,” members of Oreo’s brand team and a few advertising agencies collaborated daily in a war room in New York City. Working closely together in the war room enabled the team to respond quickly and creatively to interesting cultural events. By the time the Super Bowl took place in 2013, the Daily Twist had helped the team develop muscle memory for real-time branding and marketing.

Ten people from the team were in the war room on Super Bowl Sunday, including Michael Nuzzo, creative director for the advertising agency, 360i, Maggie Walsh, 360i’s strategist, copyeditors, graphic designers and Oreo brand representatives. Lisa Mann, VP of Cookies for Kraft Foods (owner of Oreo) and Sarah Hofstetter, 360i’s CEO, watched the game from home and were connected to the team via their laptops and phones. The day before the Super Bowl, the team met in the war room to test the technology and rehearse how they would perform on the big day. “We were over-prepared,” said Walsh. “We had this dry run on Saturday. And we had this worksheet: So what happens if this person does this, this person does this, who writes the copy, who presses send. We had all the tracking in place.”

Soon after the blackout began, Nuzzo said to everyone in the war room, “We should probably do something.” Seconds later, Hofstetter sent an email to the team with the subject, “power - opp to capitalize?” The team replied that they were already on it. Nuzzo threw out the line, “You can dunk in a blackout” and in under a minute, the team had the Twitter post composed. The post needed approval and, fortunately, a high-speed approval process was already in place. Oreo’s associate brand manager, Danielle, also in the war room, quickly made sure that no terrorist event had occurred and that it was safe to post. Next, she emailed Lisa Mann for final approval, writing, “I really want it to say ‘You can still dunk in the dark.’” Lisa loved it and gave final approval. The post was updated and published. From start to finish, the team had taken only a few minutes to design, caption, approve and publish their epic tweet.

Lisa Mann would say that it really took two years to publish that tweet. It involved conceiving of Oreo’s branding and marketing strategy to commemorate its 100th birthday; forming the Daily Twist team to produce content for 100 consecutive days; gaining skill in associating the cookie with daily newsworthy events; and ultimately growing a team that could reliably perform high-quality, real-time branding and marketing.

The epic tweet wasn’t a spontaneous act of genius. It was the result of a team that had become agile via practice and preparation. Without such work, the team would not have been able to move with quick easy grace or been quick, resourceful and adaptable in unexpected situations, like a Super Bowl blackout.

Being agile isn’t magic. It requires practice and preparation.