Agile adoption in most companies focuses on software delivery. Very few achieve business agility. When it comes to setting goals, the waterfall command-and-control mindset is still the norm: organizations use an annual, top-down process to create a set of static goals that is in direct conflict with being agile. 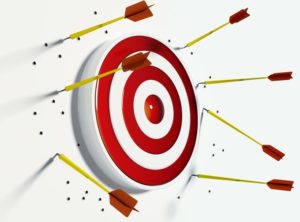 Waterfall goals and metrics turn teams into “feature factories” with no focus on delivering value. As John Cutler describes, many developers are “just sitting in the factory, cranking out features, and sending them down the line.”

Marty Cagan highlights the huge missed opportunity of feature factories: “teams are just there to flesh out the details, code and test, with little understanding of the bigger context, and even less belief that these are in fact the right solutions.” That is, the people closest to work have no influence on making decisions to help their customers or leverage existing solutions.

This failed version of Agile slows companies down and makes it harder for them to adapt to change while increasing risk and waste.

How can we even call them agile adoptions? Practitioners know that using Agile to deliver a waterfall plan has limited benefits: 70% of them report tension between their teams and the rest of the organization, while 46% of agile adoption failures are linked to company’s culture and philosophy being at odds with agile values.

The alternative to transcend the “Feature Factory” mindset is to embrace Modern Agile’s four principles. But how can we apply them in practice? How can we “do” Modern Agile?

There is one actionable tool for business agility that, if used correctly, will support the adoption of the four Modern Agile principles. This tool is OKR (Objectives and Key Results), the goal setting framework used by firms like Intel, Google, and Spotify.

The big difference from traditional planning methods? OKRs are set and evaluated frequently - typically quarterly. Furthermore, rather than being cascaded down the organization by the executives, OKR is bidirectional: teams create most of their OKRs in alignment with the company goals and then contract them with the managers in a bubble-up approach.

This approach provides a much more engaging environment for teams, who now feel responsible and accountable for the goals they help set, which they track on a fast weekly cycle.

Setting challenging goals is a fundamental tenet of OKR, which drives results and creativity. As Amantha Imber reported, research shows that if we put people in a role that challenges them, 67 per cent will demonstrate above-average creativity and innovation in their performance.

Dan Montgomery puts it well, “OKR is the day to day engine for organizational agility.”

How can OKR support the four Modern Agile principles?

Scaling agile is hard because scaling delivery (which is why corps go agile) doesn't scale value.

In Modern Agile we know that working software is not a measure of progress. While an antiquated Agile mindset focuses on output-based metrics and concepts, such as the definition of done, acceptance criteria, burn-down charts, and velocity, Modern Agile knows that “done” only matters if it adds value.

This old assumption that working software is a measure of progress rests on the belief that all software that works is valuable. Modern Agile teaches us to focus on continuously delivering real value to help make our customers awesome.

“The key to [defeating] waterfall is to realize that agilists value Outcomes over Features. The feature list is a valuable tool, but it’s a means not an end. What really matters is the overall outcome, which I think of as value to the customers.” Martin Fowler

Because it’s just a framework, OKR can be used to measure outputs. The mere measurement of activities, however, is not a proper use of OKR and is incompatible with Modern Agile.

Practicing Modern Agile requires frequently setting and evaluating Value-based OKRs, which measure the delivery of value to the customer or the organization.

The two examples below clearly show the difference:

By adopting Value-based OKRs, teams can focus on delivering value. But how can they do that “continuously”?

Several years after the release of The Lean Startup, most organizations are still working for months without delivering anything to the end user. For them, continuous delivery is a distant dream. They are stuck with the old Agile delusion that showing software to stakeholders during a sprint review or demo is an adequate measure of progress.

The OKR quarterly cycle acts as the ultimate timebox to deliver value: every team has to deliver some value during the quarter. That way, teams move beyond acceptance criteria and the definition of done all the way into testing hypotheses and experimenting and learning rapidly.

Just as with any tool. OKR is not perfect and can be misused. We think that by using Modern Agile’s four principles to guide your OKR practice, they can be a valuable and concrete starting point for your Modern Agile journey.

“If you’re just using your engineers to code, you’re only getting about half their value.” Marty Cagan

The mindset that the team is incapable of deciding what to build is toxic and demotivating. The Modern Agile principle ‘Make People Awesome’ is grounded in providing people with opportunities to contribute their best ideas.

When your team has no voice regarding what to build and just empties their plate of backlog features one after another, they’re not awesome.

To truly enable autonomous self-organizing teams, you need to give them the freedom to decide how to achieve the desired valuable outcomes. The role of the team has to change from: “delivering the features the stakeholders want” to “achieving the agreed Value-based OKRs.” 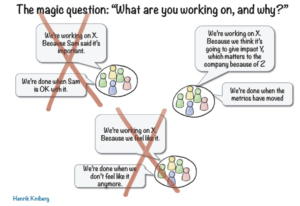 Following a fixed roadmap that lasts months or even years is a remnant waterfall behavior that still plagues several organizations that call themselves agile. They expose themselves to risk by having teams, in their most part only composed of developers, incrementally (and blindly) delivering (and to a staging environment, not production) a waterfall backlog, without any form of external validation.

Furthermore, these plans are mostly devised by a single Product Owner or Manager, who doesn’t even have access to production data that can help him/her understand the impacts of his/hers prioritization decisions. This sort of situation is demoralizing and unsafe. Mary Poppendieck, author of Leading Lean Software Development, wrote:

“Perhaps the biggest shortcoming of agile development practices is the way in which teams decide what to do. […] for the longest time, answering these questions have not been considered the responsibility of the development team or the DevOps team.” Mary Poppendieck

OKR Makes Safety a Prerequisite by ensuring that the teams collaborate on setting goals and deciding what to build (or experiment with) and adopt shorter feedback cycles, reducing risk and waste.

As David J Bland wrote, “[the process of] annual planning and budgeting collide with your efforts to adapt and change your roadmap as you learn in the market… Leaders are finally realizing that to make their organizations more agile, they’ll need to start addressing some of these [fundamental] functions to achieve organizational agility.”

It is only possible to Experiment & Learn Rapidly when we focus on outcomes and evidence rather than personal opinions. Outdated Agile is driven by the few stakeholders’ definitions of what is valuable and accepted.

OKR replaces that subjectivity with measurable experiments that allow the team to learn and iterate. It enables teams to adopt practices such as Hypothesis-Driven Development, as described by Barry O’Reilly:

We believe <this capability>

Will result in <this outcome>

If our goal is a business outcome and we give the team the freedom to experiment towards that goal, small investments can lead to awesome results. In one such example, a 20-minute feature tripled sales for ‘Know Your Company’, while Eric Elliott delivered “one Jira ticket that made his employer $1MM/Month”.

Just as with any other concrete planning framework, OKR is not perfect. Combining Modern Agile with the proper use of OKR can be a lightweight, joyful way for organizations to help their people achieve awesome results.

For more thoughts on Modern Agile and OKR, check-out modernagile.org and leanperformance.com 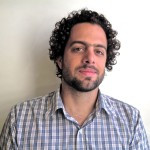