Have you ever felt that someone’s behavior was hostile or aggressive towards you, formed a negative opinion about them and then taken protective action(s) against them?

If so, you’ve likely participated in a Cycle of Mistrust.

In their must-read book, Driving Fear Out of the Workplace: Creating the High-Trust, High-Performance Organization, Kathleen Ryan and Daniel Oestreich described Cycles of Mistrust as a kind of organizational flu. 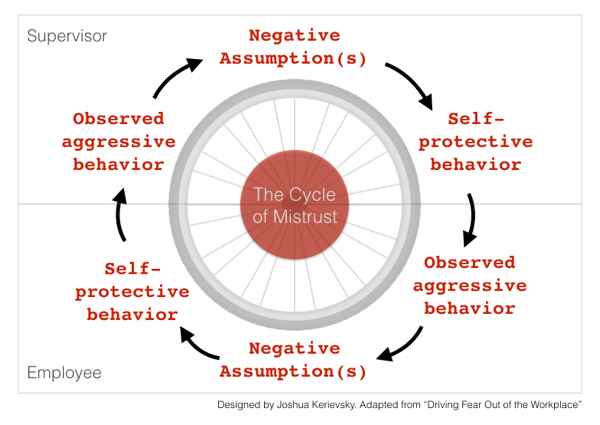 The cycle may begin at any one of the six starting points above.

The authors describe each step as follows:

Let’s look at a real-world example, beginning with a supervisor forming a “Negative Assumption” and continuing clockwise around the Cycle of Mistrust:

We’ve only made one trip around the cycle of mistrust. Unfortunately, the cycle tends to continue, getting worse with each rotation…

So what is happening in these cycles of mistrust?

Not a whole lot of real communication or understanding!

What we have here is a failure to communicate. And when that occurs, cycles of mistrust grow like weeds.

Clearly what is needed here is not more aggressive behavior but a company-wide dialogue about time sheets that highlights what they are for, why they are used, how they are meant to be used, etc. Such a dialogue could in fact lead to productive changes to the process, making everyone happier.

In fact, the above example resembles an issue within Industrial Logic. New employees had been inheriting a time tracking system without an explanation for why it existed or what is what truly meant to achieve. A cycle of mistrust developed because communication and trust were sorely lacking.

We broke that cycle of mistrust by having a company-wide discussion about time sheets, openly discussing issues with time sheets and modifying the process to be far simpler.

The first step in breaking cycles of mistrust is to become aware of them. There are many ways to approach that. One way is for employees and supervisors to privately fill out what they believe is happening during the six steps of the model. Then, if it feels safe, they can discuss their perspectives, perhaps with a trust facilitator.

In my experience, many cycles of mistrust are born out of poor communications, assumptions and an environment that is lacking in collaboration and shared understanding.

I will conclude this post with some wise words from the authors of Driving Fear out of the Workplace:

“We have found that when people understand the dynamics of the cycle and how it can influence behavior, they become both better able to let go of mistrust and more tolerant of feedback from others. It is very easy for anyone getting feedback in an environment of mistrust to take things personally and be offended by other people, alleging that they have some type of negative motive. But with a thorough understanding of the cycle, these tense situations can be viewed more objectively, and some of what might have gotten under someone’s skin can be seen for what it is: a pattern of negative assumptions to be dealt with constructively. The trap can be avoided by seeing dynamics of the cycle work. When this understanding is coupled with an explicit vision of trust, a leader is in a strong place to begin turning around relationships that have become undermined by fear.”