Home > Blog > Techniques and Patterns for Writing Once and Running Anywhere

Despite the proliferation of drag-and-drop tools for developing Java software for the Web, developers continue to face problems with inconsistent cross-platform look-and-feel, download delays, problems manipulating images, AWT limitations, browser bugs and VM speed. This tutorial discusses how to solve these problems using a small Java engine that avoids use of the AWT, provides image manipulation instructions, implements bug-workarounds and manages thread differences among browsers. The engine was built using a variety of Design Patterns that provide speed, adaptability and interoperability. So as well as describing the engine, this talk will show how to apply Design Patterns to Java.

This paper was delivered in presentation form at Object Expo ‘98 in New York City.

The Promise of Java

Late in 1995, Sun introduces Java and describes it as:

“Write Once, Run Anywhere!” is no longer a dream, and the Java Virtual Machine (JVM) promises to make nearly all platforms potentially “Java-enabled.”

All JVMs are not created equal. Nuances in JVM implementation make for unpredictable behavior.

“Write Once, Run Anywhere” is still a dream.

“Write Once, Debug Anywhere” is closer to the truth.

Major improvements like JavaSoft’s Java Foundation Classes (JFC, a.k.a. Swing) are not widely available in browsers.

Sun’s description of Java back in 1995 pointed toward an ideal.

Although that ideal is still not completely attainable today, there are ways to get closer to it.

Programming techniques and patterns, combined with building blocks already in Java, get us a lot closer to realizing Sun’s ideal.

Today, you’ll see commercial, Web-based Java applications and learn about the problems that emerged during design and development, along with the solutions to those problems.

Along the way, you’ll learn about a Java Engine that was built to make it a little easier to “Write Once and Run Anywhere”.

August 1996: Industrial Logic wins a contract to build the Java version of MTV.com.

Despite the gap between Sun’s ideal and the reality of Java/Web programming, MTV wants its Java version to:

AWT components are buggy and require a good deal of sub-classing to add the functionality you need.

AWT font support is lacking: It supports only simple fonts, and fonts rarely look the same across platforms and browsers.

Use images and write code to remove ties to the AWT.

Java’s AWT limitations and bugs make it difficult to guarantee that your UI will look and behave the same across platforms and browsers.

GIFs and JPEGs always look the same across platforms and browsers.

Platform-independent UIs can be written by using images and writing your own user-interaction code.

You’re not limited by AWT fonts: You can use whatever fonts you or your customer wants.

MTV and Industrial Logic hammered out a clear, functional specification, describing the exact behavior MTV wanted for the Java version of its site.

For example, if a visitor to MTV were to click on “MTV Sports,” MTV wanted the clicked UI component to change color and a specificied HTML page to load inside an HTML frame.

MTV also wanted a rotating list of news tickers and promotional graphics, plus the ability to specify the contents and order of that rotating list.

Many more such requirements were part of the MTV functional specification.

Problem: Too Many Parameters

Given the requirements, Industrial Logic began thinking of simple ways to let MTV parameterize its site.

One way would be to let MTV’s staff update applet parameter tags. But the list of these tags could easily exceed 100, creating an unwieldy, complex mess.

Next, we considered writing off-line tools, to manage and write out the applet parameter tags. But the resulting HTML page would be too large and slow to download.

A third approach involved writing out and reading, at runtime, a flat file containing parameter information. But then our “thin” Java client would have to be very intelligent about how to parameterize UI components.

Solution: Use A Language

Place parameters in a language that clients can easily interpret.

A sample of a language used on the MTV project:

Each sentence in this language is composed of:

Using a language simplifies programs that are highly parameterized.

Languages can be stored and read back in many ways.

Languages can include sophisticated behavioral information that may exceed what parameters convey.

Good software must support the addition of new behavior with a minimum of fuss.

The notion of Object Linking and Embedding is based on the idea of supporting new, unforeseen behavior.

After the first release of the Java version of MTV.com, MTV asked Industrial Logic to make its news tickers and promotions clickable. MTV wanted certain user clicks to trigger a number of UI events.

For future versions of its site, MTV expressed an interest in adding sophisticated animations, user-click tracking, sound effects, user recognition, legacy-system integration, and so on.

Given a language (and some client-side support), users can parameterize existing application behavior however they like.

But we still haven’t provided a way for them to add new behavior and configure UI components to use it.

With a language, users can easily specify that an image map should load HTML page “X” rather than “Y,” but they can’t tell the image map to play a sound, show an animation, and then load an HTML page.

There’s still no simple way to configure our system with new behavior.

Name behavior and execute it using a standard protocol.

Good software must accommodate the addition of new functionality.

By “naming” behavior, and using a standard protocol and language, users can make client programs execute requests, without letting the client program know what they are executing.

The levels of indirection in this solution allow client programs to remain “lightweight” while being capable of executing complex requests.

Behavior can easily be “batched” to support the execution of chained (or macro) behaviors.

In a network environment, if your users must wait a long time for a download, they will very likely get impatient.

Java does not come with any tools to help display progress meters while applets download.

Most browsers don’t support multiple archives (.zips, .jars, .cabs), so developers tend to download all of their .class files within one archive, making users wait and wonder.

Class files that are not used until some user action requires them are often downloaded anyway, regardless of whether they’ll be needed.

Without any visual feedback, network bottlenecks appear to be a problem with your program.

Developing for any network environment requires sensitivity to network speed and a user’s time.

A Microkernal can be downloaded quickly to get some informative messages to a user.

You can leverage the great power of the Microkernal to “plug in” new behavior based on need.

The Microkernal can become the coordinator of your language, your parameters and variables, and your behavior classes.

Until Java matures (most notably in the major browsers), saying good-bye to the AWT is one of the first steps in beginning to write platform-independent Java code.

Working with behavior classes (Commands), languages, and a microkernal is an equally important step in making your Java programs behave the way you want them to.

Problem: Because you’ve used so many Design Patterns, you have an explosion of classes and interfaces that make your download k size rather high.

Solution when bandwidth is an issue:

Example: On one project, Industrial Logic noticed that it had almost 200K in objects and interfaces. We had an extreemely flexible implementation, but it was too damn big! We later got the total size down to 92K.

Requirement: You must install a bug workaround.

Problem: You don’t want to modify “guts” of your code.

Solution: Create a behavior class and “plug” it into the Microkernal when appropriate.

Problem: Your UI may require a “heavyweight object,” but you’d rather not download it until some request requires its presence.

Example: (While Proxy is an incredibly useful pattern, Industrial Logic has not used it in the way described above).

What are Adaptable Systems?

"Systems evolve over time--new functionality is added and existing services are changed. Adaptable Systems must support new versions of operating systems, user-interface platforms, or third-party components and libraries. Adaptation to new standards or hardware platforms may also be necessary. During system design and implementation, customers might request new features, often urgently and at a late stage. You may also need to provide services that differ from customer to customer."
--from Pattern-Oriented Software Architecture (POSA) by Buschmann, Meunier, Rohnert, Sommerlad and Stal.

The following are two excellent definitions of patterns:

"Each pattern is a three-part rule, which expresses relations among a certain context, a problem, and a solution."
--Christopher Alexander, The Timeless Way of Building

"A pattern is a named nugget of insight that conveys the essence of a proven solution to a recurring problem within a certain context amidst competing concerns."
--Brad Appleton, "Patterns and Software: Essential Concepts and Terminology"

Patterns may make you rich. 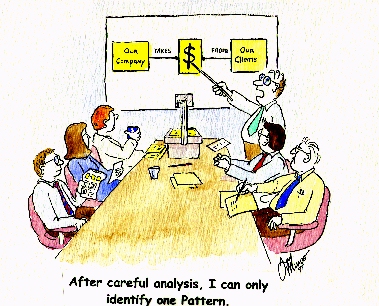 Principal patterns used in the “Java Engine” include:

Intent: Encapsulate a request as an object, thereby letting you parameterize clients with different requests, queue or log requests, and support undoable operations.

Intent: Provide a surrogate for another object that shares the same interface but does nothing. The Null Object encapsulates the implementation decisions of how to “do nothing” and hides those details from its collaborators.

Other patterns and techniques used:

The Command pattern is one of the most powerful and useful patterns there are.

Intent: Encapsulate a request as an object, thereby letting you parameterize clients with different requests, queue or log requests, and support undoable operations.

This pattern was referred to as “behavior classes” in the main presentation.

Commands are asked to interpret a language whenever their execute() method is called.

Commands interpret sentences, and do so however they see fit.

Sentences are composed by users.

Ultimately, the Java Engine is controlled, at runtime, by instruction sets.