Sitting in a meeting in a large leather chair in the boardroom of a growing company, I was pained to hear someone continually interrupting someone else. The person doing the interrupting was a male executive and the person being interrupted was a female director. The female remained quiet for the remainder of the meeting. After the meeting, I asked her privately about being interrupted. She smiled and said “Oh, yes, that happens all the time around here.”

Patrick Lencioni, author of many great books, including the Five Dysfunctions of a Team, recently tweeted: “If someone offered me a single piece of evidence to assess the health of an organization, I would want to observe the executive team during a meeting.”

Interrupting women is the norm in the business world and it’s a disgrace. Women who are routinely interrupted eventually remain silent and silence is deadly when it comes to fixing problems, adding value and innovating. A tremendous amount of value is lost when women are interrupted. And it leads to churn, as women seek new employment.

Recently, a female colleague of mine interviewed a male candidate. He manterrupted her so frequently during the interview that she decided to tally the number of interruptions. Over the course of 30 minutes, he interrupted her 10 times! Now, we know that sometimes lags in internet connections can account for interruptions, but 10 interruptions during one 30-minute Zoom call is hard to reconcile.

When Google set out to understand what led to the highest performance teams in their organization, it ultimately discovered that psychological safety was the essential ingredient. In his book, Smarter Faster Better, Pulitzer prize-winning author Charles Duhigg described how Google managers began to practice psychological safety by beginning with better meetings. When the meeting would start, they’d write down the names of each participant. When a participant spoke, they’d place a tally mark next to their name. By the end of the meeting, they could see who spoke a lot and who barely spoke at all. Over time, they encouraged quiet participants to speak, they repeated what they heard and they discouraged interruptions. This raised the level of psychological safety within their meetings and was a good start on the road to growing a culture of psychological safety.

My colleagues and I made the following poster to help others on the journey towards fewer interruptions, better listening and greater collaboration in meetings: 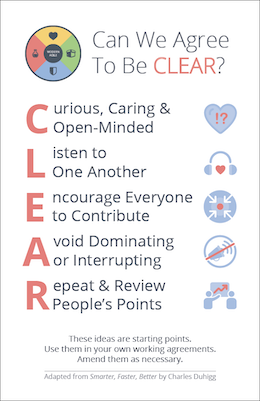 Today is International Women’s Day. Let’s use this day to remind ourselves that everyday we need to talk less, listen more and above all: