Interesting objects collaborate, but some collaborators are tricky to work with.

Stub, fake, mock; different people interpret these labels differently; I’ll use the names we use at Industrial Logic and you can substitute the names you prefer:)

We’ll walk through a series of pictures that show how microtests work with various test doubles.

Microtests usually follow the Arrange-Act-Assert pattern: Arrange some context (e.g., create and connect objects), Act to trigger some behavior, then Assert to check that the effects of that behavior are what you expected. You’ll see that pattern reflected in the pictures.

Let’s start with a simple test, with no test doubles involved:

This style is sometimes called state-based since the assertions are often about the observable state of some objects.

Depending on your testing style, you may find that the majority of your tests are like this, and you only go to other styles when this doesn’t suffice.

Some collaborators are troublemakers: they have side effects, or return random results, or require a chain of other collaborators. For whatever reason, we don’t want to use the real (production) collaborator.

In the simplest case, we can replace use a stub, a collaborator designed to do the bare minimum. Typically, it returns a constant for any return value, and ignores calls that don’t need return values.

The steps are the same as before: Arrange, Act, Interaction (behind the scenes), and Assert. The only difference is there’s no point querying the stub as it doesn’t know anything.

A stub returning the same value every time may not be able to trigger interesting behavior in the object being tested. In that case, A talking fake can be designed to return values one at a time from a list.

The test still has the same Arrange-Act-Assert structure; as with stubs, there’s no point querying the fake:

A talking fake simulates one side of the conversation but, in testing as in life, listening may be what’s important.

A listening fake records what the tested object tells it by saving the parameter values passed into calls on the fake and/or remembering which calls were made.

Our test structure is like the original test, with two key shifts:

This style of testing (and even more when using mocks) is sometimes called interaction-based, because it looks at the interaction between objects rather than the results of their collaboration.

As we’ll see next, a listening fake is at least halfway to being a mock object.

If you re-use a listening fake object for several different tests, you may notice that the assertions are very similar.

To clean up duplication among the test methods, extract out a method with common assertions. Notice that the assertions are about the fake, a feature envy smell.

So, move the assertions to the fake, and you have created a mock object. 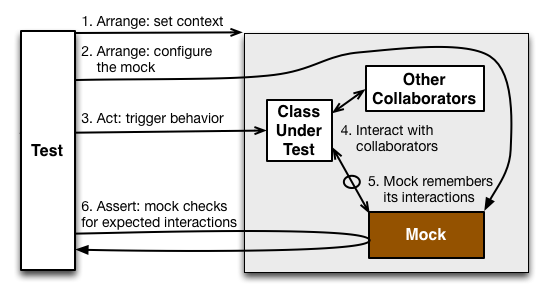 The test structure has changed somewhat:

Notice how the assertions have changed from our first test: rather than check the effects of an interaction, they check that the interaction between objects went as expected.

You can create a mock by hand, or use frameworks such as Mockito or xMock that will do it for you.

We’ve evolved from basic tests to more intricate tests that use mock objects.

While the overall test structure stays similar, mock objects shift from asserting about results to asserting that the interaction with a collaborator occurred as intended. 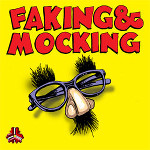 If you’d like to learn the art of faking and mocking, through challenging exercises and Q&A with our experts, try our eLearning album Faking & Mocking, available for several different programming languages. The pictures in this article were drawn from there.