I’ve returned to piano lessons after a 30-year gap, and I’m struck by the challenges of learning, whether for fun or work. 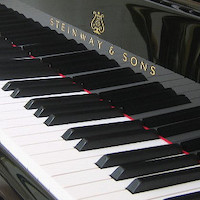 Mike Hill (@GeePawHill) pointed me to this great quote from Pablo Casals: “When Casals (then age 93) was asked why he continued to practice the cello three hours a day, he replied, ‘I’m beginning to notice some improvement.’”

With both music and software development, there’s always something to learn. You can never master everything. It’s normal to feel uncentered while you learn something new, but regular study and practice keep you learning well.