To illustrate how defenses can endanger us, let’s go back 600 years to the Battle of Agincourt.

In Managing the Risks of Organizational Accidents, James Reason uses this 1415 French vs. English battle to illustrate how even today’s high-tech defenses can endanger us. 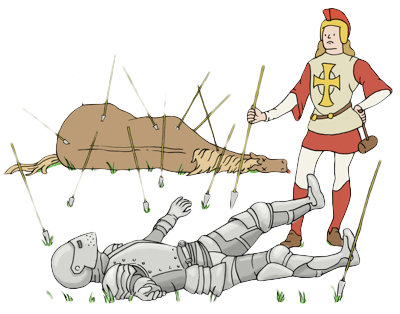 Entering the battle, the English force was lightly-clad and about one fifth the size of the French force. The French had thick plate armor that could protect them from arrows and spears. During the battle, treacherous terrain caused the two French wings to bunch together in a field. Once they were within range, the English archers hit them with a flurry of yard-long, steel-tipped arrows. While many Frenchmen died immediately in that attack, those who fell off their disabled horses lay helpless, unable to get back up due to the heaviness of their own armor! The English then made quick work of them.

"Defenses designed to protect against one kind of hazard can render their user prey to other kinds of danger, usually not foreseen by those who created them, or even appreciated by those who use them."

In software development, a team’s automated tests give assurance that the code works as expected, protecting programmers from inadvertently introducing defects.

So how could such a safety net endanger developers and users?

It happens when automated tests lead developers to become:

Do any of those hazards sound familiar and were any of them unforeseen?

In the best shops, people find and remove all hazards from their development defenses.

For automated tests, this means: