You sometimes would prefer that two nested if statements were in the opposite order.

The Nested-If Swap lets you change that order—under certain circumstances.

The most important reason to use the Nested-If Swap has to do with the power of symmetry. When things could be symmetric but aren’t, you can often improve the design by increasing the symmetry. For example:

See the asymmetry on the left? Mostly we test for values of x, but in the third case we check age first.

After we do the swap, the outer if statements are all about x. That makes it easier to explore whether x should be a class with subclasses for a-c, or perhaps we need a map keyed on x.

A second, more rare, reason to apply this refactoring is for performance. For example:

Using the swap in either of these cases could speed things up.

When it's safe, the Nested-If Swap can increase symmetry in your code, enabling further improvements.

Apply the refactoring like this: (where ?⇒ indicates that this refactoring is not always possible)

(There are ways to handle an else clause or code after the inner if, but this example shows the easiest, most common case.)

The critical part is the change from && to &: this refactoring is only allowed if they’re equivalent in this context. That is, the safety of evaluating the second if doesn’t depend on the result of the first one.

If p is null, the first version works but the second version throws an exception.

So: The Nested-If Swap is safe only if the validity of the second condition doesn’t depend on the first condition being true.

The nested-if swap is ideal when you want to safely rearrange if statements to make them more symmetric, so you can improve the design.

When you’d like to swap a pair of nested if statements, it’s legitimate if the only thing in the outer if statement is the inner one, and if it’s safe to evaluate the second condition before the first. 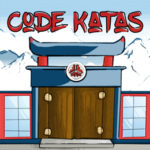 Want to try? Make this move on the Gilded Rose code in our Code Katas album (free!):

Thanks to Joshua Kerievsky, Chris Freeman, Nayan Hajratwala, and Gerard Meszaros for feedback on earlier drafts. Thanks to Dave Bradshaw for catching a mistake (now fixed) in the first example.